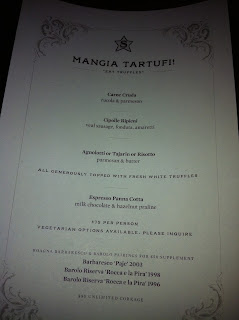 Back in December we found out about a special white, Alba truffle 4-course dinner being presented at Sorella for only $75 per person. Normally a dinner featuring so much truffles would cost quite a bit more, so we knew we had to jump on this opportunity. They led us past the front half of the restaurant which is primarily a wine bar to the back garden room. The skylights and plants made me feel a hint of spring in the dead of winter. On top of that the soundtrack was all Beatles. So far, so good.


We didn't look too closely at the menu since we had come for the truffles, so when the first course came out we weren't sure what it was, but were excited by the generous truffle portion. We started eating and at the same time were like 'Hmmm, this is... interesting...what is this exactly?' and pulled out the menu. Uh oh, carne cruda. I know enough romance languages to parse out 'raw meat'. I was almost scared to tell The Mr. We gave it an honest try, and of course picked off all the truffles, but this course just wasn't for us.
The second course was an onion stuffed with raisins, nuts, sausage and various other goodness. All of which of course is topped off with truffles! This was one of those dishes that had several layers of flavors. Eaten by itself, the stuffing failed to impress, but when eaten with the golden onion shell the flavors bloomed.

Course 3, was of course pasta. I chose the Tajarin & The Mr. chose the Agnolotti. Sooooo rich, soooo buttery, and soooo filling.

The meal ended with dessert which did not incorporate truffles in anyway, I thought it would have been cute to end the meal with chocolate truffles. But it was delicious, so if that's my only complaint for the evening, you know it was a good meal! Hope they do a repeat performance at some point.

Email ThisBlogThis!Share to TwitterShare to FacebookShare to Pinterest
Labels: Italian, Lower East Side