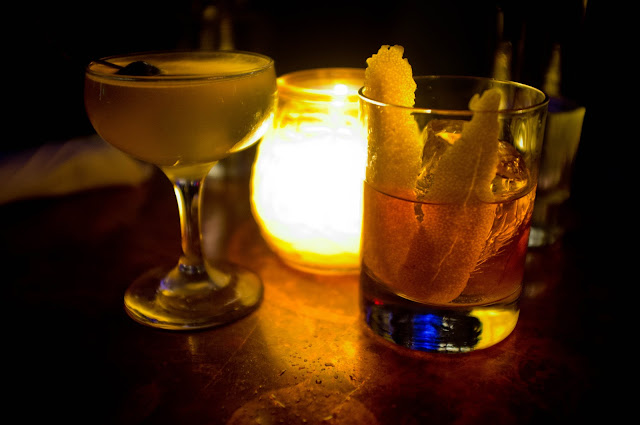 We were in the mood for oysters tonight so decided it was time to check out John Dory's Oyster Bar. Since it was impromptu, we didn't have reservations and put our name on the list. Then we jetted over to The Breslin to grab a drink and a snack while we waited. By the way, this is absolutely the way to do it. The timing of this was perfect.


We were in Long Island City for a Grand Opening Party at Alewife, but The Mr. was on a temporary non-meat-eating kick (long story), so afterwards we decided to walk down by the rapidly developing  waterfront to find some more grub. We passed a Mexican cantina and The Mr. suggested we try it out. My initial reaction was 'heck, no', since I find myself disappointed with even the well-researched Mexican places in this city. But then I realized- Totto we're not in Manhattan anymore, this is Queens! So we decided to give it a go.

Alewife: A cure for what ails ya

Tonight Alewife held a "Grand Opening" party and invited Bloggers and other Industry folk to check out the scene. I put "Grand Opening" in quotes, because the bar has actually been open since last fall, but Patrick Donagher just joined the team and has breathed a bit of new life into the project.

Hearing the words "craft beer" and "food" The Mr. agreed to joined me with very little hesitation. However, when we got in the subway and he asked "So, where is this place" and I replied "Queens", there was some hesitation. But 20 minutes later we were at the door and both a little surprised at just how easy the commute from Manhattan was.

Sarabeth's is a Solid Bet

I work near Chelsea Market and wind up going to grab lunch there at least several times a week, but I never realized that Sarabeth's has a lunch menu. One day, my coworkers popped in through a little door that I had never really paid attention to, so I decided to follow. Everyone in there seemed to know about the secret menu and were mysteriously placing orders for sandwiches and the like. I asked the cashier for a menu, and voila, the secret was unlocked.
Read more »
Posted by Marie C. Masters No comments:

Terroir at the Porch a Terrific Spot

I was having a rough day and needed to get out into the sun when I remembered seeing that Terroir's new High Line outcropping had recently opened up. Perfect! I grabbed The Mr, and we headed off to some picnic tables in the sun.
Read more »
Posted by Marie C. Masters No comments:

Email ThisBlogThis!Share to TwitterShare to FacebookShare to Pinterest
Labels: Chelsea


I was going to see Priscilla Queen of the Dessert with a couple of Australian friends and they suggested  grabbing a bit to eat at Pie Face. Funnily enough, this is their go-to post-work pre-theatre spot, so the pure Aussie awesomeness of it was kind of lost on them.
Read more »
Posted by Marie C. Masters No comments: