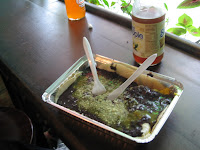 The Texans in us started craving some breakfast tacos, so I did a little research on the internets and found a place called Puebla in the East Village which had breakfast tacos. Now this part is my fault, I shoulda just stuck to a simple breakfast taco, but I went for the huevas rancheros. It was a tortilla, with some eggs, and a ton of beans. That was it. Nothing special, not big on the flavor. The Mr got a breakfast taco, but also was unimpressed.

So for the time being, we've finally discovered a craving that NYC can't seem to satisfy. I guess we'll have to dig a little deeper to scratch this itch.