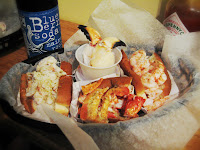 I'd heard Luke's Lobster referenced as the best lobster roll in NYC several times, so when the Mr. and I found ourselves hungry and in The Village one evening after going to a coworker's gig, I knew just where to go. What better way to sample all they have to offer than the "Noah's Ark" feast for two. Two lobster rolls, two shrimp rolls, two crab rolls, two crab claws, two bags of chips, and you guessed it, two drinks. The drinks were from Maine Root soda company which I found to be a nice authentic touch, I enjoyed the blueberry soda immensely. Of the food, the lobster rolls were hands down better than everything else, and next time we visit this establishment we will just go straight for that. While I haven't had many other lobster rolls in this fair city, these seemed like they would be pretty hard to beat. In fact, later in the week the Mr. had another lobster roll craving and so got one from The City Crab across the street- didn't even come close.