An Evening with Todd English

We Newbie Foodies are Todd English fans, so when the following Gilt City deal showed up in my inbox, I was all over that like broth on ramen:

The evening had finally arrived, so we headed down to Meatpacking to the pop-up GQ store. First we picked up one of each of the evenings signature drinks. There was a delicious and festive pomegranate martini and then here was the Notorious FIG. (Recipe here). This was hands down our favorite.


Then we scoped out the cooking demo table to see what was in store for the evening...looks like seafood!

Then we started perusing the store and enjoying the passed appetizers: 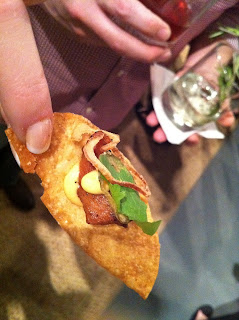 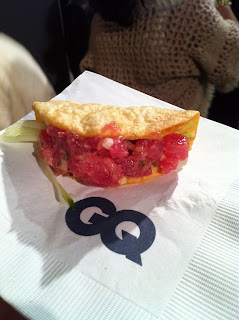 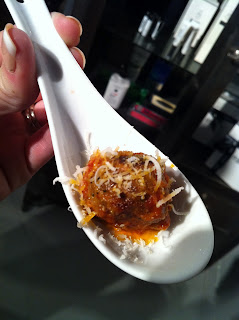 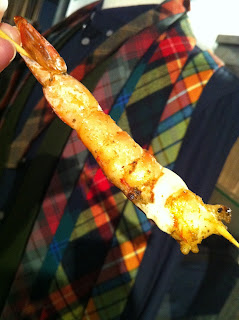 Finally, Chef English himself came out for the cooking demonstration! Unfortunately, the space wasn't very acoustic and they did not provide him with a sound system. Lucky for us, we were at the front, but I'm sure people towards the back must've had a difficult time hearing. Then he also explained that while they were supposed to do a cooking demonstration of something from his new book, at the last minute they told him he couldn't actually cook anything because they were worried about the smell lingering on the clothes...hey way to plan GQ. Chef English took it in stride and went with ceviche. He called two participants up from the crowd and guided them through to the finished product.

The final presentation inside the hollowed out sea urchin was fantastic. And since we were at the front, we actually got to try some. It was mild and creamy and slightly sweet thanks to the avocado and sesame seed- delicious!  While we waited in line for our book signing, we enjoyed some hot cocoa, Rice Krispies treats, and red velvet cupcakes.

Finally, we got to meet Chef English (who complimented us for having a cool last name) and have our books signed. We kept one for ourselves and the other we will be giving away as a Christmas Gift!

Despite some poor planning on GQ's part, this turned out to be a fantastic event!