Not wild about Wildwood BBQ

We need to scope out all our neighborhood Gramercy/Flatiron haunts and we had a pang of longing for BBQ so across the street to Wildwood BBQ we went. We wanted to order some ribs, but they were out. Out? You're a BBQ restaurant and you are OUT of ribs? We scoffed and then ordered the brisket and pulled pork with beans & creamed spinach instead. 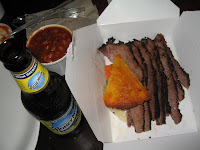 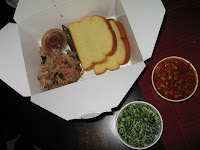 Despite our scoffing, we had to admit it was good. Much better than us Texas BBQ connoisseurs expected to get in NYC. However, it didn't blow us away. Final verdict is that it will do when we need a quick BBQ fix, but is probably not a place that we will actively seek out again.