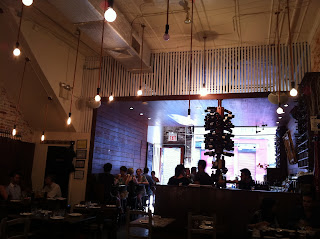 After a trip to the USS Intrepid with some family, we found ourselves on the West Side Highway and starving. I used mobile phone technology to find the closest restaurant with the best reviews that would appeal to my company and discovered Ovest Pizzoteca. I had no idea what to expect, but was shocked to find a super trendy restaurant in Chelsea's no-mans-land.


The prominent wood burning stove featured in the back of the restaurant looked like it meant business, so I was excited when our pizza finally arrived:

It was good! A flavorful sauce and a crazy thin crust. For me, the crust was actually a bit too thin, but this is a matter of personal taste, so it might be just right for someone who is an extreme thin crust lover. We were here around 5:30pm on a Thursday, so it sounds like we beat the rush- I've read other reviews that complain about Ovest getting a little too hoppin.
This was a nice find that came through in a pinch, but we won't be abandoning our beloved Patsy's. But if you want some good pizza in Chelsea with more of a scene, you should check it out.