Joining up with Blue Caravan

Chef Mei Chau made a name for herself with Franklin Station Cafe, a Malaysian/French bistro in TriBeCa which closed after 15 years of being a neighborhood favorite in June of 2008 due to soaring rent prices. But now she's back with her new global cuisine restaurant on the Upper West Side Blue Caravan. Some of the favorite dishes from Franklin's can be found on the menu, but she is also taking the opportunity to try out some brand new items. The space is fresh and modern that manages to be casual yet elegant and features photography from Mei's husband Marc. 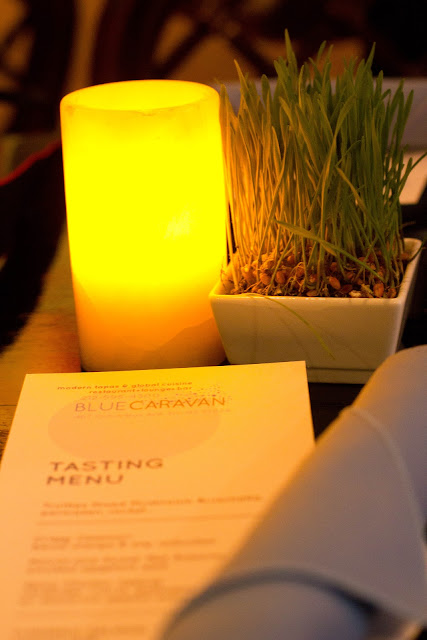 Mondays are World Music Nights from 7-10pm with music coordinator Arturo Martinez. On the music menu for tonight was some Brazilian fare, it set the mood and was still soft enough to be able to carry on a conversation. (Tip: Next week is Flameco with a singer and dancer!) They also have a Jazz Brunch on Sundays from 12-3pm with vocalist Kay Mori.

Looks good enough to eat...and it was! Unfortunately, my camera battery died at this point, so you'll have to make do with iPhone quality pictures from this point on.

These three small plates worked really well together. The arancini were crispy and smokey, the chicken skewers were tender and moist, and the calamari was crunchy and sweet. The calamari is what really stole the show and this is the dish that I recommend most from the evening. Quite possibly the least rubbery calamari I've ever had and the blood orange and soy reduction was sweet enough to be dessert. I would swear that they were coated in chopped nuts, but according to Chef Mei it's a simple garlic and flour mixture. Amazing.

Foreground: Turmeric Salmon with coconut milk, turmeric ginger, and acar vegetables. My second favorite dish, this one carried over from Franklin's and was immensely popular there. One taste of the sauce and I could easily see why. She could serve this amazing sauce with anything and have a hit on her hands. You definitely will find yourself wanting to sop up the leftovers with some bread...or a spoon.

Background: Pan Seared Magret Duck served over wild rice with a cranberry raisin cherry part glaze. Without meaning to, the above photo is very symbolic. Although this dish was quite good, it was overshadowed by the Turmeric Salmon.

Finally, for dessert, home-made profiteroles and a slice of apple tart. Amazingly, Mei also does most of her own desserts! The profiteroles are a chocoholic's dream, but surprisingly, the apple tart was my favorite.

I had the pleasure of meeting Mei and Marc and they are clearly passionate and excited about their new endeavor. Having just opened in April, they are still trying new dishes and changing the menu, so it's an exciting time to visit. Also, be sure to stop by the bar and get a drink from Steve, he was our server for this evening and was an absolute delight. They are usually all to be found on site, so be sure to introduce yourselves to them!


*My meal was provided by the restaurant as part of a Press Dinner.